Conqueror of the World: Alexander the Great

By Jacob Abbott. By the age of 33, Alexander of Macedon had conquered most of the known world and would have seized more, had he not met an early end.

This incredible true story of a young king, barely out of his teens, who took on the might of the Persian Empire and won military victories of staggering significance, is one of the greatest true tales ever told.

From his homeland in the north of Greece, Alexander swept through southern Greece, crossed the Hellespont and marched through all of Asia Minor, the Middle East, Mesopotamia and Egypt.

He achieved incredible victories for eleven years of almost continual warfare against astounding odds, and was the only military leader in history never to suffer defeat in battle.

From the almost legendary siege of Tyre (where he built a causeway across a kilometer of sea to reach his foe) to the great Battle of Gaugamela, Alexander seemed invincible, until he was undone at last by his own personal weakness.

This book does not shy away from probing Alexander’s dark personality traits and the degeneration of his personal life which caused his early death. Illustrated, index.

Jacob Abbott (1803–1879) was a native of the state of Maine who was a professor of mathematics and natural philosophy, a minister, and founder of two schools (the Mount Vernon School for Young Ladies in Boston and the Mount Vernon School for Boys, in New York City). He wrote more than 180 books and became famous for his easy-to-read style of historical storytelling, stripped of the dry dustiness which characterized other texts. 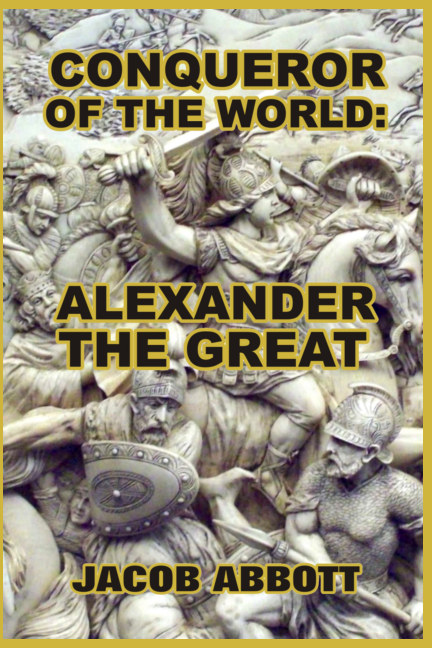 Conqueror of the World: Alexander the Great