By Jacob Abbott. Part five of an eight part series on the history of America from its earliest times through to the age of George Washington, told by master storyteller Jacob Abbott.

Starting with a brief recapitulation of the establishment of the thirteen colonies along the Atlantic seaboard of North America, this volume then details the interactions—in war and peace—of the early European settlers with the Indians and with each other.

The major early Indian wars—with the Pequot and King Philip—are discussed in little-known but fascinating detail. Included are many action-packed anecdotes of life on the frontier, the hardships of pioneer life—and duplicity and strife between Indian and European.

Read also of the clashes between the English and the French in Canada and in the interior, and the effect of the War of the Spanish Succession in North America.

“The French and the English seem determined to hate each other everywhere and at all times, and the hardships and sufferings which these different representatives of a common civilization endured, and which we might have supposed would have formed a bond of interest and sympathy to link them indissolubly together, in reality seemed to have no such effect. The dividing zone of mutual repulsion and animosity, which has for so many centuries extended along the Straits of Dover and the English Channel, now crossed the Atlantic, and spread itself along the line of the Lakes and of the Mississippi, forming an unbroken wall of aversion and hate, for a distance of two thousand miles.”

After many bloodcurdling clashes involving Indians, Europeans, and varying alliances on both sides of the racial divide, the build-up to, and the progress of, the French and Indian War is discussed.

The British conquest of Canada from the French is then dealt with, ending with the deaths of both French and English commanding generals at the battle for Quebec.

Finally the war with the famous Indian chief Pontiac is reviewed, along with dramatic events such as the Deerfield Massacre and the cunning strategies employed by Pontiac to exact many victories over the Europeans until his final—and inevitable—defeat.

CHAPTER I: The Thirteen Colonies

CHAPTER V: The Lakes and the Mississippi

CHAPTER IX: The Conquest of Canada 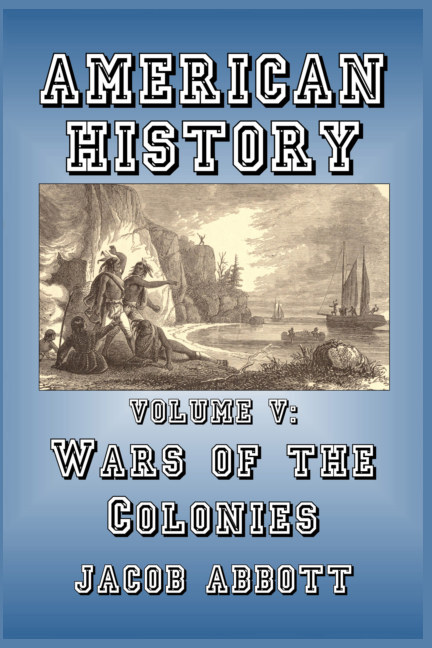 Wars of the Colonies