45 Views by The Editor

By Jacob Abbott. Part six of an eight part series on the history of America from its earliest times through to the age of George Washington, told by master storyteller Jacob Abbott.

This volume provides a fascinating and detailed account of all the events that led up to the opening military engagements of what became the American Revolution. Starting with a discussion of how the concept of government, independence, and liberty took root in the thirteen colonies because of their unique social makeup, the author moves on to contrast this with the commercial and economic demands of England.

The introduction of the Stamp Act and its effect upon the colonies is treated with objectivity and the author fairly reviews both sides of the argument—and discusses many of the excesses committed by individuals on both sides.

As events sped up, the clock was set in motion for a military clash. The exploits of, among others, John Hancock, Samuel Adams, James Otis, and the other major players are revealed in gripping detail, along with the heavy-handed Boston Massacre, the burning of HMS Gaspee, the Boston Tea Party, and the Battle of Lexington—when the British finally realized that they were no longer dealing with unhappy colonists, but a full-fledged rebellion.

“The news of what had taken place at Lexington and Concord spread like wildfire among all the neighboring towns, and the people everywhere seized their arms, organized themselves into companies, and hastened to the line of the road which the troops must take in returning, to intercept and harass them on their march. They fired at them from behind trees and stone walls, and lay in ambush for them at every turn. They followed them up so closely as not to allow them a moment’s rest, and worried them with so galling and incessant a fire that they became in the end almost entirely exhausted; and indeed, it was thought that they would have been entirely cut off and the whole body captured if General Gage had not sent out a strong force to meet and rescue them. By the assistance of this force they succeeded in getting back to Charlestown, though with a loss of nearly a quarter of their number.”

CHAPTER I: Principles of Government

CHAPTER II: The Mother Country and the Colonies

CHAPTER IV: Progress of the Quarrel

The Controversy not Settled by the Repeal of the Stamp Act.—Unfavorable Turn of Affairs in England.—Dispute about the Damages.—Renewed Attempt to Tax the Colonists.—The Idea of the Government.—Preparations for a Contest.—Effect of These Measures in America.—John Hancock.—Samuel Adams.—John Hancock’s Sloop Liberty.—The Circular Letter of Massachusetts.—Occasion of the Circular.—The Question of Independence.—Displeasure of the Ministry with the Circular.—Decision of the Assembly of Massachusetts on the Question of Rescinding.—Address to the Ministry Accompanying the Refusal to Rescind.—Public Opinion in Boston on the Question of Rescinding

Opposition to the Measures of the Government General throughout All the Colonies.—Alleged Trivialness of the Causes of the Quarrel.—The Two Great Foundations of English Liberty.—General Effect of These Limitations.—Practical Result in England.—Intentions of the English Government in Respect to America.—Action of Virginia.—Lord Botetourt.—English Ideas of the Display of Pomp and Parade as an Auxiliary of Government.—Pomp and Parade Affected by Lord Botetourt.—Conciliatory Tone Adopted by the Governor in His Opening Message.—The Virginia Resolutions.—The Governor Dissolves the Assembly.—The Example of Virginia Is Followed by All the Southern Colonies.—A Minority Opposed to These Proceedings.—The Lottery Tickets.—The Pride of the Government Forbids Concession.—The Government Finally Yields.—The Colonists Far from Being Satisfied with This Declaration

Excitement in England.—The Port Bill.—Period during Which the Harbor of Boston Was to Remain Closed.—Other Measures Adopted for Bringing the Colony under Control.—Remodeling of the Provincial Government.—Provision for Conveying Accused Persons out of the Colony for Trial.—Effect of the Announcement of These Measures in America.—Appointment of a New Governor.—Reception of Governor Gage in Boston.—Arrival of the Intelligence of the Passage of the Port Bill.—Effect of the Intelligence upon the Country at Large.—Arrival of the Fatal Day.—Sympathy of Other Colonies with Massachusetts.—Material Aid for the People of Boston.—Magnanimous Conduct of Salem and Marblehead.—Organization of a Continental Congress 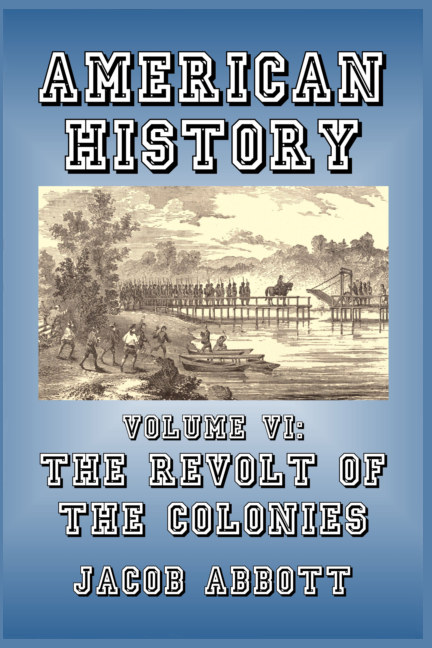 The Revolt of the Colonies