By Jacob Abbott.  Part eight of an eight part series on the history of America from its earliest times through to the age of George Washington, told by master storyteller Jacob Abbott.

In this ultimate volume, Abbott tells the story of the life of George Washington, the military leader of the American Revolution, and the first president of the nation he led to victory against the British Empire.

This is no dry autobiography—it is an action-packed insider view of the American Revolution, and the creation of the United States. It tells of Washington’s early life, his family background, his early military career, and his first retirement and farming activities at Mount Vernon. This period also includes many little-known personal details, drawn together using Abbott’s famous original research methodology.

Washington’s recall to public service by the Continental Congress to lead the revolution, his victory, election as first president, policies, and the creation of the branches of government, are then recounted, providing once more many fascinating details and revelations on how the great issues of the day were addressed—which still have ramifications to the present day.

On the nature of the greatness of Washington:

“Washington was, as it were, the first of a new class of great men, such as the world before his day had scarcely known—that is, of men who acquire renown not by imposing their ideas and enforcing their will upon their countrymen, but by embodying and carrying into effect the ideas and determinations which their countrymen had previously formed.

“Washington did not originate the idea of the independence of America, as perhaps Julius Cæsar did that of the universal empire which he founded.

“The conception of American independence and nationality was gradually developed in the public opinion of a widely extended, intelligent, and well informed community.

“Washington was called upon to give effect to the will of this community, and for this purpose vast powers were put into his hands. When the work was accomplished he resigned the power, and returned to his retirement, leaving to that great community itself the entire responsibility of future action.”

CHAPTER II: The Valley of the Ohio

Situation of the Valley.—Value of This Western Territory.—Conflicting Claims of the French and of the English to the Possession of the Valley.—Merits of the Question.—Rights of the Indians.—Advantageous Position of the French in Entering into the Contest.—Disadvantages of the English Situation.—Formation of the Ohio Company.—Employment of Washington by the Ohio Company.—Appointment of George Washington to a Military Command.—His Military Studies.—Death of Lawrence Washington.—Mount Vernon.—Preparations for War.—Reluctance of the People of the Colony to Undertake the War.—The Cooperation of the Other Atlantic Colonies Obtained.—Interference of Jurisdiction and Authority during the War.—Difficulties of Being at the Same Time Many and One.—General Course and Result of the War.—The Part Performed by Washington.—Nature of His Services.—Occasion of the First Battle and Victory.—Advance to the Attack.—Return of Washington to Private Life

CHAPTER VI: The Disbanding of the Army

Three Successive Forms of Combination Adopted by the States.—Essential Difference in the Nature of These Systems.—Nature of a Confederation.—The Union.—Duration of the Continental Congress.—First Movement in Favor of a Confederation.—Debates on the Subject in the Continental Congress.—Articles of Confederation Adopted and Proposed to the States.—Provisions of the Proposed Confederation.—Majority Required.—The States Equal under the Confederation.—No Executive Department.—Common Citizenship.—Restrictions on Separate State Sovereignty.—Provision for the Settlement of Questions of Controversy Arising between One State and Another.—The Articles of Confederation Adopted by Congress and Transmitted to the States.—Little Advantage Gained.—Influence of Peace and War in Respect to the Operation of the American System of Government.—Termination of the Revolutionary War.—Resignation of the Secretary of the Treasury.—The Army.—State of Completely Suspended Animation Reached at Last.—Subjects Demanding Attention from the General Government during These Times.—General Conviction of the Necessity that a Stronger Government Should be Established.—Shay’s Insurrection.—The General Government Powerless.—The Insurrection Subdued.—All Confidence in the Confederate Government Finally Lost

CHAPTER IX: Inauguration of the Government

CHAPTER X: Working of the System 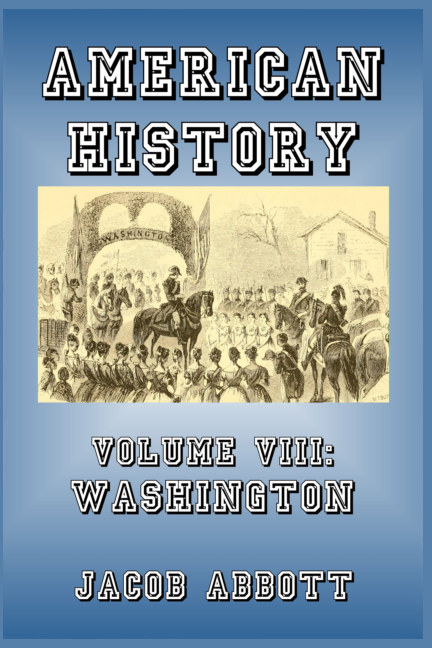