By Princess Catherine Radziwill. Despite its title, this book is not a biography of the English Imperialist but rather an on-the-spot and personal review of the tumultuous events leading up to, during, and immediately after the South African War of 1899–1902.

Basing much of her account on personal observations and interviews, the author provides a fascinating overview of many of the intrigues and personalities of the time. She was also able to clearly discern through the fog of war the real reason for the conflict:

“Whilst touching upon the subject of the Transvaal, I may say a word concerning the strangely mixed population, for the sake of whom, officially, Britain went to war. The British public was told that it was necessary to fight President Kruger because Englishmen in the Transvaal were being ill-treated and denied their legitimate rights. In reality, this was one of those conventional reasons, lacking common sense and veracity, upon which nations are so often fed.

“If we enter closely into the details of existence in the Transvaal, and examine who were those who shouted so loudly for the franchise, we find that the majority were either foreigners or Jews hailing from Frankfurt or Hamburg . . . [They] were Jews, mostly of Teutonic descent, who pretended that they were Englishmen or Colonials; . . . . The Beits, the Neumanns and the Wernhers were German Jews; Barney Barnato was supposed to have been born under the shade of a Portuguese synagogue . . . [t]he Joels were Hebrews; the Rudds supposed to belong to the same race through some remote ancestor; the Mosenthals, Abrahams, Phillipps, and other notabilities of the Rand and Kimberley, were Jews…

“The war, which was supposed to win the franchise for Englishmen in the Transvaal, was in reality fought for the advantage of foreigners. Most people honestly believed that President Kruger was aiming at destroying English prestige throughout the vast dark continent, and would have been horrified had they known what was going on in that distant land.”

About the author: Polish-born Russian aristocrat Princess Catherine Radziwill (1858–1941) was a prolific author and traveller, who wrote more than fifteen works dealing with contemporary politics, historical topics, and her favorite topic, the fate of the last Russian tsar. Strongly anti-Communist, she fled Russia after the Bolshevik Revolution. After living in exile in Europe, she later went to America where she was naturalized as a citizen, and where she died aged 84. 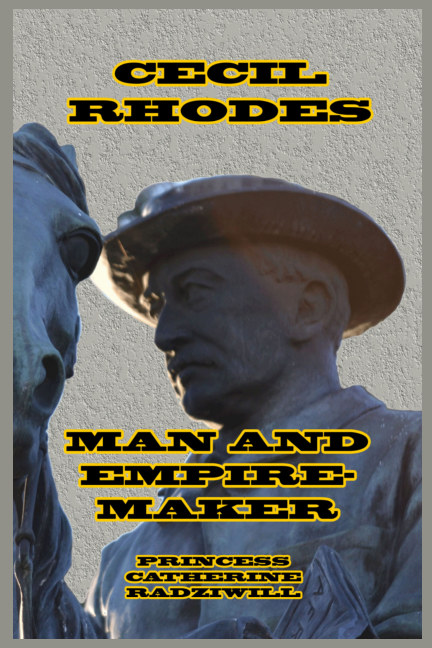