By H. A. Guerber. A comprehensive overview of Norse legend and mythology, and a treasure trove of historical marvels, tales of glory and death, defeat and victory.

As the author wrote in the forward: “The aim of this handbook is to familiarize the English student with the religion of his heathen ancestors, and to set forth, as clearly as possible, the various myths which have exercised an influence over our customs, arts, and literature.

“As Danes, Swedes, Icelanders, Germans, English, and French all came originally from the same stock and worshiped the same gods, so these tales formed the basis not only of their religious belief, but also of their first attempts at poetry.”

Drawing upon the rich legacy of the Eddas and Sagas, this work traces not only the full pantheon of the Northern Gods and their foes, but also provides a fascinating insight into the historical origins of some of the main characters—who appear to have been based on real-life characters whose deeds immortalized them into legend—and finally a comparison with classical Greek mythological characters, showing the interrelatedness of the great Indo-European peoples.

It also discusses in detail how the early Christian missionaries merged many of the Norse beliefs into Christianity—such as the transference to the Christian holiday of Easter the attributes of the goddess Eástre (Ostara), from whom it took its name, “Christmas” from Yule, and Hell from the Norse goddess of the underworld, Hel, among many others.

Read also of the Norse origins of well-known legends such as Sleeping Beauty, the Pied Piper of Hamelin, customs and rituals such as Yule, days of the week, and much, much more.

This marvelous anthology is highly recommended for any person wishing to gain a better understanding of one of the most important belief systems in northern Europe before the introduction of Christianity.

“This is the great story of the North, which should be to all our race what the Tale of Troy was to the Greeks—to all our race first, and afterwards, when the change of the world has made our race nothing more than a name of what has been—a story too—then should it be to those that come after us no less than the Tale of Troy has been to us.”—William Morris.

This new edition of H. A. Guerber’s classic work contains all the original text and includes introductory matter from two earlier editions, along with indices, glossary, and pronunciation guide.

It has been hand-edited and entirely reset in 446 pages along with 64 marvellous illustrations.

Hélène Adeline Guerber (1859–1929) was a multilingual British historian who won fame for her dramatic retelling of Germanic, Norse, and Greek mythology. She also produced highly sought after works on ancient Greece, Rome, the Renaissance, the Reformation and the founding of the Thirteen Colonies in North America. 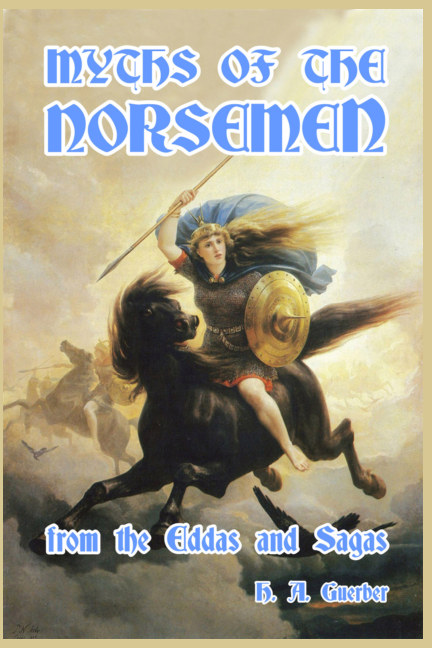 Myths of the Norsemen