The Story of Europe: From the Fall of the Roman Empire to the Reformation

By H. E. Marshall. A wonderfully-written masterpiece of storytelling, originally designed for younger readers but which became popular with all ages because of its easy-to-read narrative, this book tells the story of the development of all the European nations from the time of the fall of the Roman Empire until just after the Reformation.

Acknowledged as an ideal introduction to the history of the European Middle Ages, this book is written in a rollicking early twentieth century style which pulls no punches in describing the racial issues which confronted Europe, as this quote from the section on the Ottoman invasion of Europe illustrates:

“The Ottoman Turks were the last barbarian tribe to settle upon European soil. They did not disappear like the Huns, they were not driven forth like the Saracens, they have in no way become Europeanized like the Hungarians or Magyars, they have remained Asiatic and alien, a blot upon the map of Europe to this day.”

Contains the full text and all the original charts, maps and tables.

Chapter I: The Barbarians Invade the Roman Empire

Chapter II: The Rise of the Franks

Chapter IV: The Rise and Fall of Justinian’s Empire—The Role of the Eastern Empire

Chapter VI: The Rise of Mohammedanism

Chapter VII: The Conquest of Spain by the Arabs

Chapter VII: The Defeat of the Saracens—The Rise of the Carolingians—The Donation of Pepin

Chapter IX: The Reign of Charlemagne—The Beginning of the Holy Roman Empire

Chapter X: The Treaty of Verdun—The Beginning of France, Italy, and Germany

Chapter XI: The Coming of the Northmen

Chapter XII: The Northmen in France and England

Chapter XIII: The Beginning of Russia

Chapter XV: The Beginning of Scandinavia—Denmark and Sweden

Chapter XVI: The Beginning of Scandinavia—Norway

Chapter XXI: The Progress of France towards Nationality

Chapter XXIII: The Beginning of the Crusades

Chapter XXIV: The Crusades: The Christian Kingdom of Jerusalem—The Founding of the Great Orders of Knighthood

Chapter XXV: The Crusades: The Latin Empire of Constantinople

Chapter XXVI: The Effect of the Crusades—The Fall of Constantinople

Chapter XXVII: The Holy Roman Empire—Strife with the Popes—Commercial Progress

Chapter XXVIII: France: The Captivity of the Popes—The Beginning of the Hundred Years’ War

Chapter XXXII: The Moors Driven Out Of Spain—Spain Begins to Count among the Nations of Europe

Chapter XXXIII: Changes In Europe Caused by the Discovery of the New World

Chapter XXXIV: The Progress of Russia

Chapter XXXV: The Rise of Switzerland

Chapter XXXVII: The Struggle between France and Spain for Supremacy in Italy

Chapter XL: The Beginning of the Reformation

Chapter XLV: The effect of American conquests on Spain 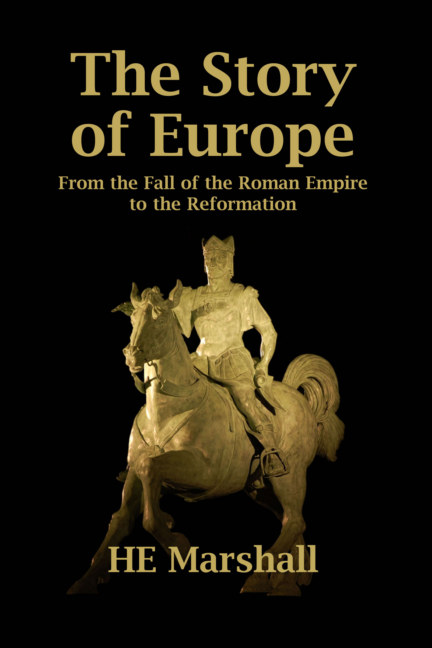 The Story of Europe