By Mary MacGregor. Two beautifully-written retellings of the legend of St. Christopher—which is largely allegorical—and of the real-life story of St. Cuthbert, one of the most important early Medieval Christian religious figures of northern England, by master storyteller Mary MacGregor.

The legend of St. Christopher first appeared in western Europe during the ninth century, and told the story of an extraordinarily tall man named Offero who, after first serving Satan, converted to Christianity and one day unknowingly carried the young Jesus across a river. In this way he was renamed “Christopher” or the “carrier of Christ.” Later martyred by pagans, Christopher was canonized by the Catholic Church, and is to this day the patron saint of travellers.

There is little concrete evidence that Christopher actually existed, and the legend was most likely derived from the story of Saint Menas, a third century Egyptian in the Roman army, executed for refusing to recant his Christian faith.

In addition, Christopher’s river-crossing episode is most likely a retelling of the ancient Greek legend of Jason, who carried an old woman across a raging river, who was actually Hera, wife of Zeus and the goddess of woman and marriage.

The story of St. Cuthbert is based on the life of an early Celtic Christian monk who, through his life and work, made famous the monasteries of Melrose and Lindisfarne in Northumbria in the Northeast of England.  Famously Spartan and known for his generosity to the poor, he was accredited with the gift of healing and was known as the “Wonder Worker of Britain.” He carried out missionary work all over Britain and Ireland, and founded an oratory at Dull, Scotland, which later became a monastery and then the University of St Andrews. Canonized after his death, he became the patron saint of northern England. 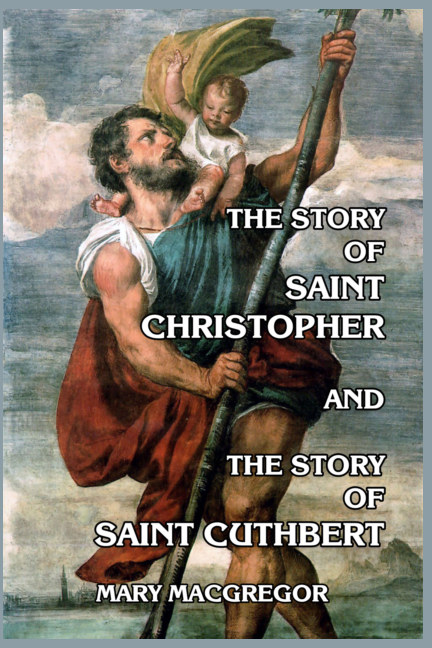