By Charles Sumner. Written by one of America’s most famous slavery abolitionist activists of the mid-nineteenth century, this astonishing book provides a fascinating insight into a period of history now largely suppressed from view by political correctness—the time when at least one million Europeans were seized and sold into slavery by the nonwhites of North Africa.

The author provides a full background to the Islamic slave trade in white people and includes little-known details such as how the Muslim pirates even seized groups of Pilgrims on their way to North America.

“Their corsairs became the scourge of Christendom, while their much-dreaded system of slavery assumed a front of new terrors. Their ravages were not confined to the Mediterranean. They penetrated the ocean, and pressed even to the Straits of Dover and St. George’s Channel. From the chalky cliffs of England, and even from the distant western coasts of Ireland, unsuspecting inhabitants were swept into cruel captivity. . .

“In 1684, Algiers, being twice bombarded [by order of the French king Louis XIV] sent deputies to sue for peace, and to surrender all her Christian slaves. Tunis and Tripoli made the same submission. Voltaire, with his accustomed point, declares that, by this transaction, the French became respected on the coast of Africa, where they had before been known only as slaves.”

The author also points out the evil of slavery worldwide, and of how Charles V of Spain simultaneously fought Barbary slavery while granting European traders the right to export slaves to the Spanish colonies in the New World: “It is said that Charles lived long enough to repent what he had thus inconsiderately done. Certain it is, no single concession, recorded in history, of king or emperor, has produced such disastrous far-reaching consequences.”

A remarkable work which contributes to a greater understanding of the mentality behind slavery—and the reality that Europeans were as much victims of this evil practice as any other people.

About the author:  Charles Sumner (1811–1874) was a senator for Massachusetts who was one of the leaders of the abolitionist movement in pre-Civil War America. A radical reconstructionist, Sumner actively sought the destruction of racial segregation and even sought to remove the word “white” from American naturalization laws—which made his work on white slavery in the Barbary states even more remarkable and, later on, his most suppressed work. 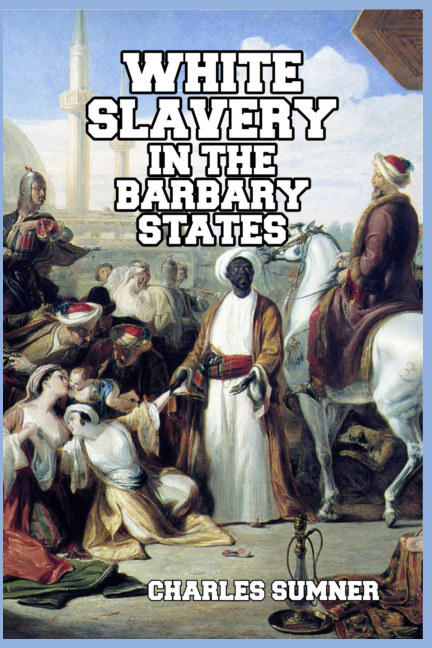