76 Views by The Editor

By Paul B. du Chaillu. One of the most famous early white explorers of central West Africa, the American Paul du Chaillu won fame for confirming the existence of the gorilla—and for his accurate and breathtaking descriptions of the life, customs and behavior of Africans in the pre-colonial era.

This book was written after the author’s last expedition into the African interior when Du Chaillu set out with the intention of reaching the Nile River. After over a year of travel, the expedition failed and he was forced back after being wounded by a poison arrow during an attack by a hostile interior tribe.

The high adventure of Du Chaillu’s expedition—and brutally frank descriptions of his encounters with the natives—are just part of what makes this work a compelling read. It also contains vivid and uncensored descriptions of native African culture, cannibalism, tribal warfare, witchdoctors, superstition, and technology. His astute observations were used by Oxford University professor John R. Baker in a section on African cognitive ability in his classic work Race.

His description of African slavery in particular, is highly relevant, as it shows that the biggest traders in slaves were the Africans themselves, despite all efforts by the British Royal Navy to halt the practice.

“Happily the Slave Trade will never flourish as it did in times past, and it may be said now to be almost entirely done away with. In the country of my late exploration, the only people who continue the traffic in slaves are negro agents, from the two Portuguese islands St. Thomas and Prince’s, who purchase people for their masters, who are also negroes. They cross to and from the mainland in small canoes, and thus avoid the cruisers.”

He also addresses the claimed existence of advanced African kingdoms in West Africa prior to the advent of the European Age of Exploration:

“The reader who has followed me through the volume of my former exploration and the present book, will have been able to gather an idea of the general character and disposition of the negro of this part of Africa, as he now stands. I have made researches to ascertain if his race had formerly left remains, showing that he had once attained a tolerably high state of civilisation; my researches have proved vain, I have found no vestige whatever of ancient civilisation. Other travellers in different parts of Africa have not been more successful than I have.”

“I think everything tends to show that the negro is of great antiquity, and has always remained stationary. The working of iron, considering the very primitive way they work it, and how easy it is to find the ore, must have been known to them from the remotest time, and to them the age of stone and bronze must have been unknown.”

“As to his future capabilities, I think extreme views have prevailed among us. Some hold the opinion that the negro will never rise higher than he is; others think that he is capable of reaching the highest state of civilization. For my own part, I do not agree with either of these opinions.

“I believe that the negro may become a more useful member of mankind than he is at present, that he may be raised to a higher standard; but that, if left to himself, he will soon fall back into barbarism, for we have no example to the contrary. In his own country the efforts of the missionaries for hundreds of years have had no effect; the missionary goes away and the people relapse into barbarism. Though a people may be taught the arts and sciences known by more gifted nations, unless they have the power of progression in themselves, they must inevitably relapse in the course of time into their former state.”

This new edition has been completely reset and contains all 23 illustrations and maps which accompanied the original work.

About the author: Paul du Chaillu (1831–1903) was the son of a French trader who was stationed on the West African cost. In 1855 he was sent by the Academy of Natural Sciences at Philadelphia to explore Africa because of his knowledge of the local languages and customs. In two expeditions into the interior, he observed numerous gorillas, brought back dead specimens, and also confirmed the existence of African pygmies, becoming the first European to observe them in real life. Du Chaillu sold his hunted gorillas to the Natural History Museum in London and his cannibal skulls to other European collections. Later he specialized in the prehistory of Scandinavia, and died while doing research in St Petersburg, Russia.

CHAPTER I: The Voyage

CHAPTER III: Excursions in Search of the Gorilla and the Ipi

CHAPTER IV: Start for the Interior

CHAPTER VII: The Plague in Ashira-Land

CHAPTER XIII: The March through Apono-land

CHAPTER XIX: Journey to the Coast

APPENDIX I: Descriptions of Three Skulls of Western Equatorial Africans.—Fan, Ashira, and Fernand Vaz.—with some admeasurements of the rest of the Collection of Skulls, transmitted to the British Museum from the Fernand Vaz, by P. B. Du Chaillu. By Professor Owen, F.R.S., &c. 304

APPENDIX II: Instruments Used in the Expedition to Ashango-land. 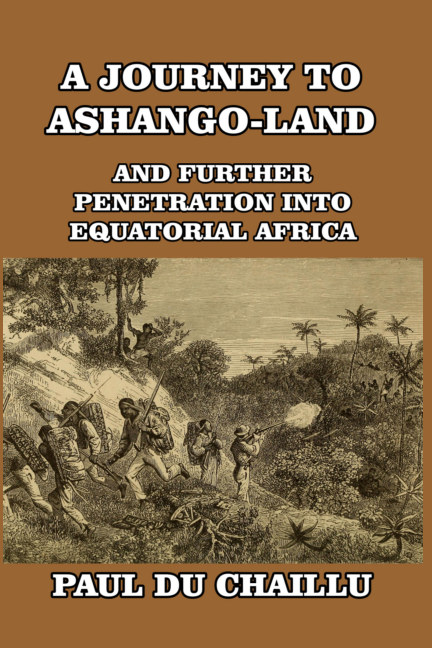