The Adventures of John Jewitt, only Survivor of the Crew of the Ship Boston during a Captivity of Nearly Three Years among the Indians of Nootka Sound in Vancouver Island

By John Jewitt. Edited with an introduction and notes by Robert Brown, Ph.D.

In 1803, the American ship Boston was attacked, seized, and burned by Nootka Indians while anchored off the Pacific Northwest Coast of what is now Canada.

This journal—written by one of only two survivors of the massacre, provides a fascinating insight into the author’s 28 months as a slave of the Indians, one of the few white men to endure such a lengthy ordeal and live to tell the tale.

Jewitt’s life was spared by the Indian chief Maquina, who realized that it was useful to have an armorer slave who could repair the European weapons which had fallen into Indian hands. Slaves were the Indians’ most valuable property, and each Indian tribe kept hundreds of them.

Jewitt began keeping a journal, carefully recording everyday details about the Indians, their lifestyle, customs, and traditions. His descriptions provided anthropologists with a unique insight into early Amerindian society, while the story of his exploits and eventual escape make for a riveting adventure story.

“The king, who, as I have already observed, knew enough of English to make himself understood, entered the circle, and, placing himself before me, addressed me nearly in the following words: ‘John—I speak—you no say no; You say no—daggers come!’ He then asked me if I would be his slave during my life—if I would fight for him in his battles, if I would repair his muskets and make daggers and knives for him—with several other questions, to all of which I was careful to answer, yes. He then told me that he would spare my life, and ordered me to kiss his hands and feet to show my submission to him, which I did. In the meantime his people were very clamorous to have me put to death, so that there should be none of us left to tell our story to our countrymen, and prevent them from coming to trade with them; but the king in the most determined manner opposed their wishes, and to his favor am I wholly indebted for my being yet among the living.”

Robert Brown (1842–1895) was a Scottish scientist who traveled extensively on expeditions around the New World, and who published dozens of works on the botany, ornithology, geology, and geography of the areas he explored.

Chapter I: Birth, Parentage and Early Life of the Author

Chapter III: Intercourse with the Natives—Maquina—Seizure of the Vessel and Murder of the Crew

Chapter IV: Reception of Jewitt by the Savages—Escape of Thompson—Arrival of Neighboring Tribes—an Indian Feast

Chapter VII: Appearance of the Natives—Ornaments—Otter-Hunting—Fishing—Canoes

Chapter XII: War with the A-Y-Charts—A Night Attack—Proposals to Purchase the Author

Chapter XIV: Arrival of the Brig Lydia—Stratagem of the Author—Its Success 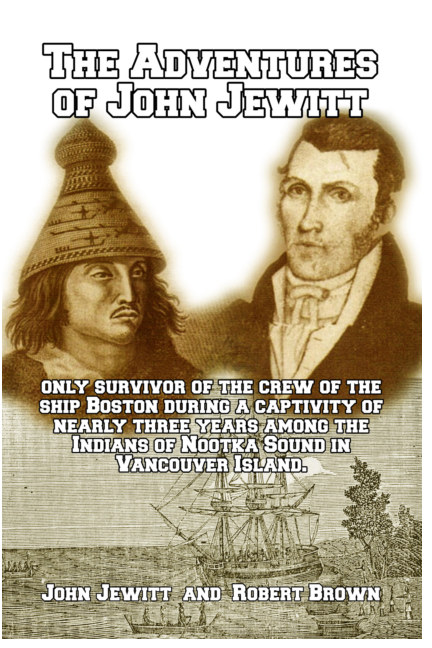