By Frederick Davis Greene. “A complete and thrilling account of the terrible atrocities and wholesale murders committed in Armenia by Mohammedan fanatics including a full account of the Turkish people, their history, government, manners, customs and strange religious belief”—reads the accurate and original subtitle to this masterful account of the Ottoman Turkish Empire’s criminal rampage through Armenia during the nineteenth century.

First published in 1896, this book remains the premier source for what became known as the Armenian holocaust—an ongoing series of massacres resulting in the near-complete extermination of the Christian Armenian people at the hands of the Muslim Turks.

The author—an American missionary to Armenia—explains in detail the brutal nature of Islam, its self-professed divine right to enslave, torture and murder non-Muslims at will, and the terrible atrocities inflicted upon the Armenian people for no other reason than that they were Christians—and more intelligent and successful than the Turks.

Written before the age of political correctness, the author has no hesitation in pinpointing the true nature of Islam and its unparalleled cruelty and barbarity—and points out how the Islamification of any society will have the same effect as seen in Armenia.

“In spite of all that has been written and said on the subject, there are many who find it hard to comprehend the awful character and extent of the massacres of Turkey. They are such an anachronism, so foreign to the spirit of the age, as to seem unreal—in fact, impossible under any European Government. But it must be remembered that Turkey herself is an anachronism, and that she is not simply foreign, but hostile to the spirit of the age. This fact is continually obscured by the diplomats of Europe and America, who persist in treating Turkey as if she belonged to the family of civilized nations.”

Frederick Davis Greene (1863–1962) was born in Bursa, Turkey, to American Protestant missionary parents from Maine, USA. Being born and raised in the Levant, Frederick became acutely aware of conditions in the Ottoman Empire, and after taking up a missionary post in Armenia, wrote profusely on the cruelties Christians experienced under Turkish Muslim rule.

Henry Davenport Northrop (1836–1909) was a leading American author of educational, historical and Christian works, most famous for titles such as American History for Young Folks.

Chapter I: A Chapter of Horrors

Chapter III: The Chronic Condition of Armenia and Kurdistan

Chapter V: The Outcome of the Treaty of Berlin

Chapter VI: The Sultan and the Sublime Porte

Chapter VIII: Islam as a Factor of the Problem

Chapter IX: Gladstone on the Armenian Massacre and on Turkish Misrule

Chapter X: Who Are the Armenians?

Chapter XI: Americans in Turkey, Their Work and Influence

Appendix A: A Bit of American Diplomacy in Turkey

Appendix B: U. S. Consulates in Eastern Turkey

Chapter XV: The Cry from Armenia

Chapter XVI: The Shame of Christendom

Chapter XVII: An Appeal for Armenia

Chapter XVIII: The Massacre at Urfa

Chapter XIX: The Last the Worst

Chapter XXI: The Tyrant Turk and the Craven Statesmen

Chapter XXIII: The Blot on the Century

Chapter XXIV: The Armenians—Who are They?

Chapter XXVIII: Turkey and the Turks

Chapter XXXI: Cause and Extent of the Recent Atrocities

Chapter XXXII: To the Rescue

Chapter XXXIII: What One May See in Armenia

Chapter XXXIV: The Turks and their Religion

Chapter XXXV: History of Turkey and the Mohammedan Power 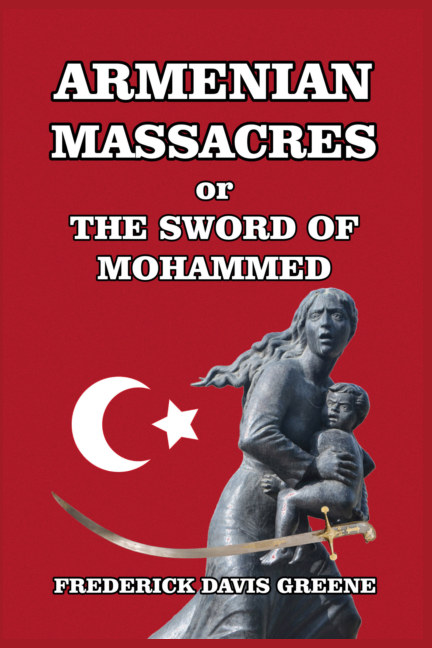