81 Views by The Editor

By Jeanie Lang. A masterful retelling of the story of the siege of Troy, as contained in The Iliad. Written especially for younger readers, this book provides a perfect introduction to the storyline contained in the classic work, starting from the events which led to the ten-year siege of Troy by a coalition of Greek states, and ending with the death of Hector after the climactic final battle which featured the hero warrior Achilles.

The reader will meet the famous characters Paris, Helen, Hector, Ajax, and many others, all of whom have passed into the realms of European folklore, even though the events of The Iliad occurred over 2,500 years ago.

Along with The Odyssey, The Iliad is among the oldest existing works of Western literature, with the earliest written version dating to around the eighth century BC.

This version has been completely reset and hand-edited and contains the original illustrations by W. Heath Robinson.

Chapter I: The Story of What Led to the Siege of Troy

Chapter II: How Achilles and Agamemnon Fell Out

Chapter IV: The Fight between Paris and Menelaus

Chapter V: How Menelaus Was Wounded; and the Brave Deeds of Diomedes

Chapter VII: The Fight between Hector and Ajax

Chapter VIII: The Burning of the Dead; and the Battle of the Plain

Chapter IX: The Message to Achilles

Chapter XI: The Fighting on the Plain

Chapter XIII: The Rousing of Achilles

About the author: Jeanie Lang was a turn of the twentieth century Scottish author who was introduced to the literary world by her uncle Andrew, who was the first to translate The Odyssey into English. Her first book was, not surprisingly, a reworking of The Odyssey and The Iliad into a version suitable for younger readers. 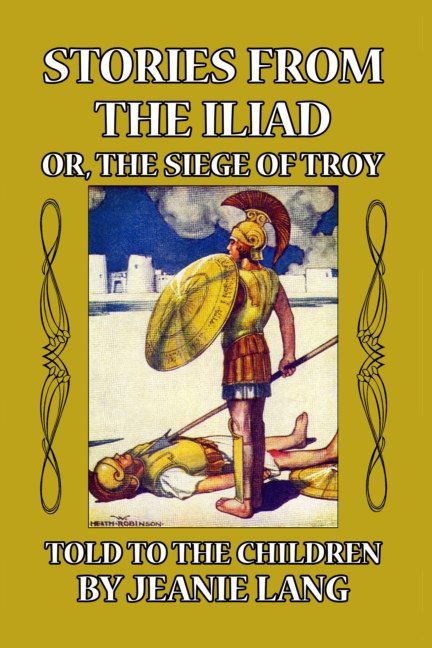 Stories from the Iliad