By George Allan England. A gripping work of dystopian science fiction from early twentieth century American Socialism which explores the logical consequence of unfettered Capitalism taking control of all the earth’s natural resources and turning them to elitist profit. In this story, a private corporation under the control of a billionaire named Isaac Flint finds a way to extract the oxygen and nitrogen from the atmosphere, so it can sell the right to breathe back to those who are able to afford it. Those working-class people who cannot afford to buy air…..

This drama-filled novel then tells of the working-class resistance to this outrage, and ends explosively—literally—in line with the author’s genuinely-felt revolutionary Socialist ideals. Along the way, the author lands many home truths which are still valid in the present day. For example, the plot includes a merging of Mexico, the US and Canada in the interests of an “increased market”—which results in the flooding of the US by Mexicans who drive down wages and make it impossible for working-class Americans to earn a living wage…

“With the absorption and annexation of Canada, Mexico and Central America, slavery full and absolute settled down upon us. The unions simply crumbled to dust as you know, in face of all those millions of Mexican peons swamping the labor-market with starvation-wage labor.”

This book’s theme is especially relevant in the present-day, when the Reagan-Thatcherite economic model of “privatization at all costs” is still a dominant economic ideology, despite its obvious failings.

As the author wrote in his foreword:

“For many years I have entertained the idea that if a monopoly be right in oil, coal, beef, steel or what not, it would also be right in larger ways involving, for example, the use of the ocean and the air itself. I believe that, had Capitalists been able to bring the seas and the atmosphere under physical control, they would long ago have monopolized them. Capitalism has not refrained from laying its hand on these things through any sense of decency, but merely because the task has hitherto proved impossible.

“I believe in political action. I hope for a peaceful and bloodless revolution. But if that be impossible, then by all means let us have revolution in its other sense. And with the hope that this book may perhaps revive some fainting spirit or renew the vision of emancipation in some soul where it has dimmed, I give The Air Trust to the workers of America and of the world.”

About the author: George Allan England (1877–1937) was an American writer who, after obtaining an M.A. degree from Harvard University, became an explorer and socialist politician. He ran—unsuccessfully—for Governor of Maine, and wrote more than fourteen novels, most with socialist themes. 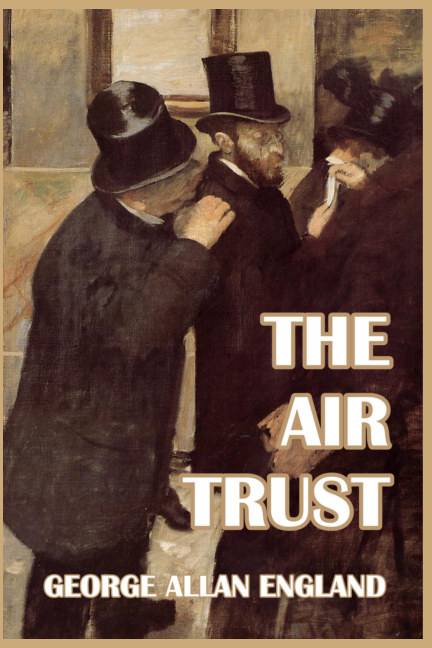