39 Views by The Editor

By Jacob Abbott.  Part seven of an eight part series on the history of America from its earliest times through to the age of George Washington, told by master storyteller Jacob Abbott.

Abbott recounts in gripping style not merely the main facts of the American Revolution, but also fascinating personal details, and little-known twists and turns of this tumultuous, world history-changing event.

Read in detail the course of events, starting with the First Continental Congress, the opening shots at the battles of Lexington and Concord, the early British successes, the imported Hessian mercenaries, the daring bravado of General George Washington, and the great battles of the war, ending with the surrender of Cornwallis and the treaty of peace.

“The new ministry immediately took measures for negotiating a treaty of peace, and the news was received in the American camps by the war-worn and exhausted soldiers, and among all the towns and villages throughout the country, by the whole population, with unbounded joy.

“The people had indeed great occasion to rejoice, for the means and resources of the government for carrying on the war, and even for keeping their armies in the field, were almost entirely gone, and the soldiers in all the camps were reduced nearly to the last stages of destitution and suffering. Still, if the end had not been thus received, the country would have aroused itself to new efforts and continued the struggle.”

CHAPTER I: The Continental Congress

Virginia and Massachusetts.—Difficulties in the Way of Forming Any Union of the Colonies.—Liability to a Charge of Treason.—Appointment of Committees of Correspondence.—Organization of the Continental Congress.—Professed Object of the Proposed Congress.—Appointment of Delegates to the Congress by the Other Provinces.—Place of Meeting of the First Congress.—First Meeting of the Members.—Organization of the Congress.—Closed Doors.—Solemnity of the Scene at the Opening of the Session.—Patrick Henry.—Principle of Representation Adopted.—Question of Opening the Session with Prayer.—The First Prayer in Congress.—Difference of Opinion among the Members in Respect to the Course to be Pursued.—Final Decision of the Congress.—An Appeal to Arms Conditionally Recommended.—Dissolution of Congress.—Immediate Results of the Action of the First Congress.—The Continental Congress.—Parliament Refuses to Receive the Memorial Addressed to It by Congress

CHAPTER II: Expulsion of the British from Boston

CHAPTER III: The Declaration of Independence

CHAPTER V: Campaign in the Jerseys

CHAPTER VI: The Expedition of Burgoyne

CHAPTER VII: The Surrender of Burgoyne

CHAPTER IX: The War at the South 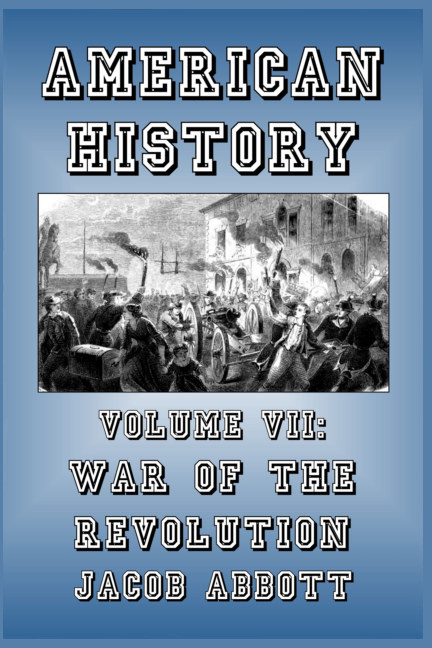 War of the Revolution