By Alfred J. Church.  The comedy of Classical Greece set the standard by which all of European—and ultimately world—comedic theater is judged. Here in this volume, the very best of Greek comedic works by the most famous authors is presented in easy-to-read English.

While these works will grant the reader an insight into just how advanced Classical Grecian culture was, they also reveal otherwise hidden aspects of Greek society and provide details on the workings of political institutions, legal systems, religious practices, education, and warfare in the Hellenic world.

Greek comedy was divided into three specific eras: Old Comedy, Middle Comedy, and New Comedy. All three represent specific periods of history. Old Comedy was the first and oldest genre, Middle Comedy that of the time period leading up to the collapse of Classical Greece and the emergence of Macedonian dominance, while New Comedy lasted until the end of the Alexandrian Empire. Sadly, nothing but tiny fragments remain of the Middle Comedy.

Old Comedy was exemplified by the writer Aristophanes (c. 446–386 BC), and nine of his works appear in this book. A master of political satire, Aristophanes mocked leading persons and institutions of his day, including Socrates in The Clouds, and the Athenian government in The Parliament of Women.

Menander’s style was noted for its unusual combination of escapism and realism, while Philemon dealt with philosophical issues. Diphilus’s works, on the other hand, were noted for their broad comedy and farcical violence. Apollodorus is possibly the best known and most successful of all the New Comedy writers, and was known for his focus on women as subject matter.

PART I: Stories from the Old Comedy.

The Acharnians; The Knights; Peace; The Wasps; The Clouds; The Birds; The Frogs; The Parliament of Women; Plutus

The Buried Treasure; The Ghost; The Shipwreck; The Brothers; The Girl of Andros; Phormio

About the author: Alfred John Church (1829–1912) was an English classical scholar and teacher, who worked as professor of Latin at University College, London. His notable works include the translation of Tacitus, Pliny, and much of his own original Latin and English verse. 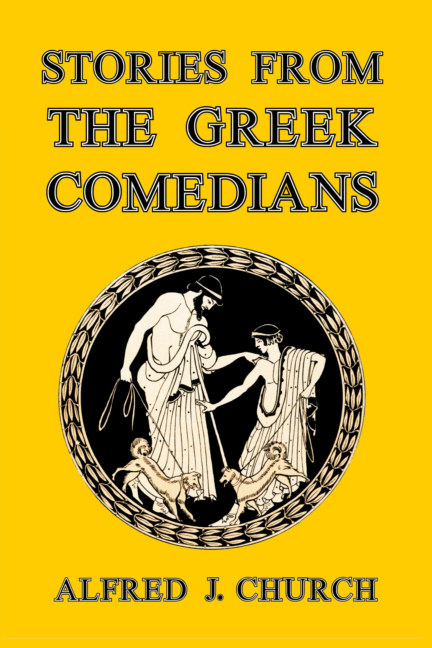